Rescued pangolin returns to the wild! 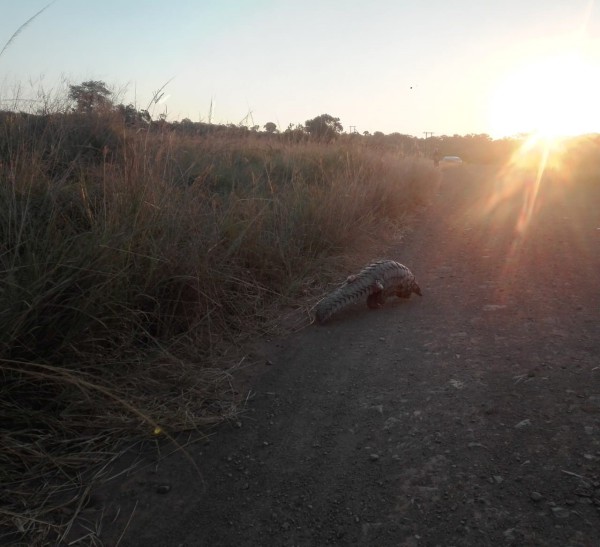 We’re thrilled to share that rescued pangolin, Louis, as he has affectionately been nicknamed, has entered the slow release process on a reserve in Zululand!

Louis was saved from certain death in the illegal trade by quick thinking EWT and H12Leshiba Game Reserve staff, with support from the African Pangolin Working Group, a little over a month ago. He has since been recovering from his ordeal under the expert care of the Johannesburg Wildlife Veterinary Hospital, and this week, the process required to return Louis to the wild, where he belongs, began.

While initial plans were for Louis to be released in the Soutpansberg area, where he was rescued, he will now form part of an exciting reintroduction of the species to the Zululand area. Louis is joined by a pregnant female pangolin, who was also rescued from the illegal trade. Together, they offer hope for the future of the species in the area.

The first phase of the slow release process involves the pangolins being walked into the area of eventual release every evening.  After a sufficient foraging session, they will go back into their sleeping box where they will sleep until the next foraging session. This daily process usually continues for between three and five days, but it may take longer, depending on the individual animals and how they adapt and behave. The process is always closely guided by a staff member so that the pangolins’ behaviour can be monitored and correctly interpreted. Once the animals have settled and are displaying normal behaviour, they will be released.

Post-release monitoring will be done through both VHF and satellite telemetry units that have been fitted to these pangolins. For the first three weeks, Louis and his partner must be found twice a day and a visual observation recorded – type of habitat, burrow type, and behaviour. The monitor needs to observe the animals feeding and record the ant species. It is critical to weigh the animals in the field so that we can ascertain that they are indeed feeding properly. This is important because weight loss is the first indication that Louis or his partner may not be doing well, and we can then act before it is too late. Thereafter, they must be located twice a week for a further three months, then once per week for the remainder of the year. After that, they will hopefully have settled in an area and monitoring can continue as desired.

This release process, and the monitoring that accompanies it, is imperative if we want to ensure the continued safety and wellbeing of these precious pangolins. There have been many instances where these traumatised animals have deteriorated post-release and had to be readmitted to hospital, or worse, have succumbed to their illnesses. Indeed, even with a slow release process, there is around a 20% chance of a relapse. This makes fitting tracking devices, and monitoring these animals regularly, absolutely essential.

We are so grateful to all of our wonderful supporters who have donated towards Louis’ recovery and release thus far! You have helped us to reach R40,000 of our R122,000 goal. The money raised thus far will cover Louis’ tracking device and some of the costs of his rehabilitation. But we need to make sure he is effectively monitored for at least three months, and preferably a year. These tracking data will also give us a better understanding of the behaviour of these elusive creatures, helping us to conserve not just Louis, but many more pangolins in the future. Can you help us to keep him, and other pangolins, safe?