Your browser is not supported
To get the best out of GivenGain, please use a modern browser.

During the last weekend of August 2020, Jamie Marais became the only known person to cycle a vertical ascent of 9,000 metres, the equivalent elevation of Mount Everest (8,845m), in a Big 5 game reserve over 36 hours. Jamie chose to put himself through extreme discomfort and great personal risk to raise much needed funds to protect endangered wildlife and feed communities affected by COVID-19. 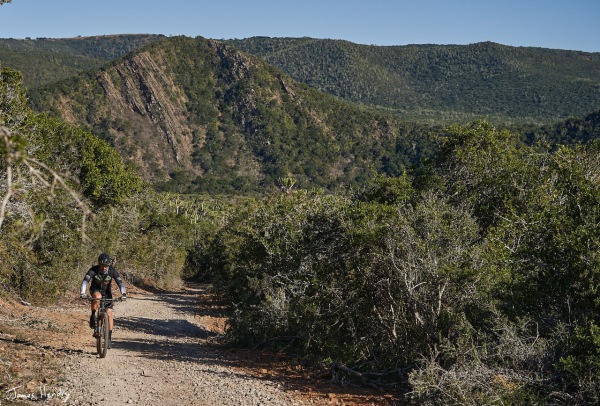 Jamie comments, “These heart wrenching causes pushed me to press on through brutally cold conditions on a treacherous route to reach the summit of a gruelling gravel circuit 40 times and cycle 337 kilometres in the heart of the Kariega Game Reserve. Knowing the defenceless animals and starving locals needed help inspired me to soldier on through the night as temperatures plummeted to near freezing and snow fell on high-lying areas, including Table Mountain. The heartfelt donations gave me the strength and perseverance to ride alongside wild animals, including an ever-present bull elephant nicknamed Charlie."

The event was born after Jamie called Lindy Sutherland, director of the Kariega Foundation, six weeks ago. Jamie understood that COVID-19 lockdowns meant zero revenue for tourism businesses. Neither he nor the host of volunteer media and event helpers realised the impact of these community and conservation programmes, such as these run by the Kariega Foundation, usually funded by guest levies.

“In the aftermath of COVID-19 it is so important for all of humanity to look outward and beyond their own needs to the plight of those who cannot help themselves. Raising funds to ensure the safety of our endangered species and keep our neighbours and friends fed has become our priority,” comments Kariega Foundation director Lindy Sutherland.

An international team of positive and creative people donated their time, talents and sponsorship to plan and run the event. These included legendary cycling commentator Phil Liggett, three time winner of the Roof of Africa off-road endurance motorbike race Louwrens Mahoney of KTM, Mountain Bike magazine editor Paul Ingpen, and film maker Fergus Clark, who aims to use the footage to create a documentary, plus many others.

Thank you to near and far

Family, friends, media, staff and supporters assembled at Kariega Game Reserve for the uniquely South African event during the last weekend of August. Many others from around the world tuned in to the live social media broadcasts.

The event breathed much needed energy back into the reserve after being closed for five months due to COVID-19 lockdowns. The Kariega Game Reserve lodges partially re-open to South African guests from 1 September.

Graeme Rushmere, Kariega Foundation trustee and Kariega Game Reserve co-owner comments, “We have been blown away by the support from around the world. We are hugely grateful to everyone who has contributed and donated. Over R400,000 has been raised for the Kariega Foundation Anti-Poaching Unit and community food relief programmes to date. Our hope is that Jamie’s cycle and the collaborative event will inspire others to face the fear, stress and hardships of the COVID-19 epidemic, and find similar motivation to build unity and help others in need.”

Today is the Day that Jamie Rides for Rhinos

Today is the day! Jamie started his attempt to cycle twice the height of Everest in 36 hours within our Big 5 reserve at 6am SA time on Saturday 29 August. He is doing this to raise funds to protect rhino and feed those in need.

Watch live on our Kariega Facebook and Instagram channels. Join us to experience a momentous effort by Jamie, behind the scenes updates and 36 hours in the wild at Kariega Game Reserve!

Here is a message from Jamie that he recorded earlier in the week to thank everyone who has already donated. We so appreciate every contribution.

Support Jamie’s recording-breaking effort by making a donation or starting a fundraising campaign of your own to help us achieve our equally massive target of raising R1 million to ensure our rhino remain safe and neighbours fed.