On 13 December 2012, a little colt named Tiger was born. He was barely a month old when we were called out to come and treat him for a wound. He had a large open wound on the side of his spine and was taken to Blue Cross Veterinary Clinic where he was treated by Dr Nadia de Swart. Although we could never find a clear explanation for the cause of the wound, it looked like he had been stabbed with a broken bottle neck.  He had a very good owner and this was a deliberate, malicious attack.Horses are not allowed to be put in a cart until they are at least three years old and after the wound healed he lived a happy life. When he was brought in for shoes the first time in Aug 2016, our head farrier Ashley however, noted that he had very slack pasterns and suggested that he not be used for working on the road. He would be allowed to come to Epping to fetch food, but was not to go out and "skarrel".In 2017 he was sold to a new owner and his misery began. From 2017 to now, he changed owners numerous times and was at times a major welfare concern. Our inspectors have  to adhere to the provisions of the law follow procedures, so sometimes it can be very tricky (and frustrating) to get a horse removed from unfavourable circumstances.As time passed, he was sold again and when his new owner brought him to the clinic for shoes, he was informed that Tiger was indeed booked off the road permanently and he was not allowed to work him. Our suggestions fell on deaf ears and we knew it was only a matter of time before we would catch him on the road.Sure enough, last week his original owner came to us saying that he saw him standing at the scrap yard. Inspector Diana was there in a flash and trucked the boy to the R&R where he is now recovering from his ordeal. With a lot of patience and some canny, we managed to take him out of the industry for good! 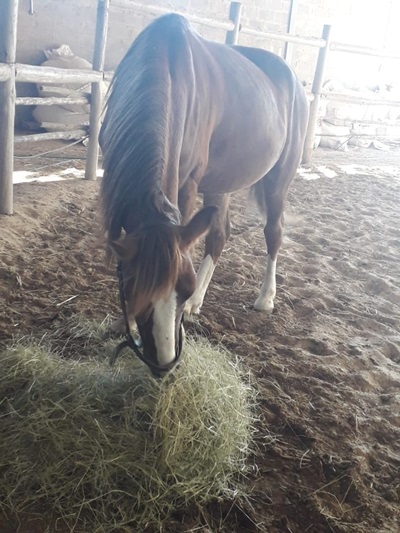